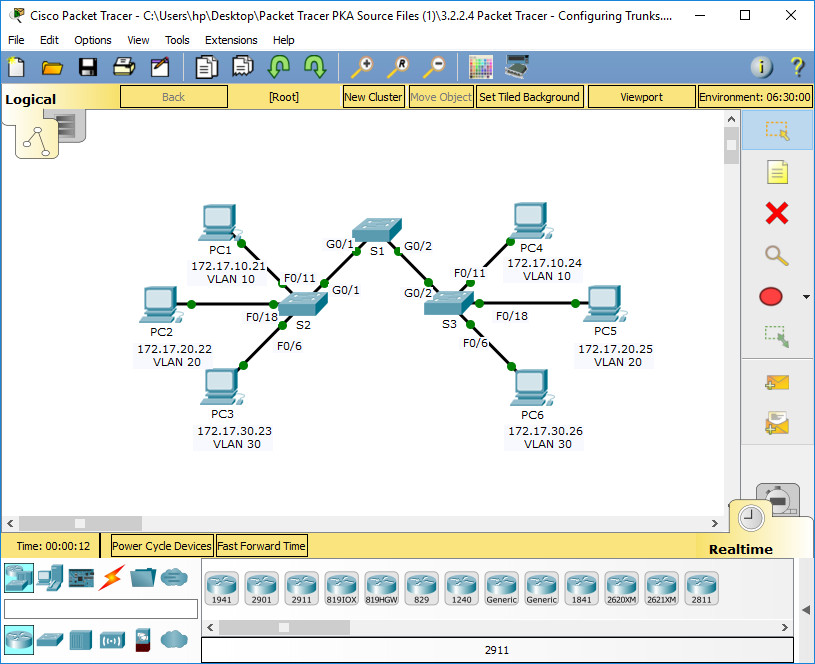 Trunks are required to pass VLAN information between switches. A port on a switch is either an access port or a trunk port. Access ports carry traffic from a specific VLAN assigned to the port. A trunk port by default is a member of all VLANs; therefore, it carries traffic for all VLANs. This activity focuses on creating trunk ports, and assigning them to a native VLAN other than the default.

a. On S1, issue the command that will display all VLANs configured. There should be 9 VLANs in total. Notice how all 26 ports on the switch are assigned to one port or another.

b. On S2 and S3, display and verify all the VLANs are configure and assigned to the correct switchports according to the Addressing Table.

Step 2: Verify loss of connectivity between PCs on the same network.

Although PC1 and PC4 are on the same network, they cannot ping one another. This is because the ports connecting the switches are assigned to VLAN 1 by default. In order to provide connectivity between the PCs on the same network and VLAN, trunks must be configured.

Step 1: Configure trunking on S1 and use VLAN 99 as the native VLAN.

The trunk port takes about a minute to become active due to Spanning Tree which you will learn in the proceeding chapters. Click Fast Forward Time to speed the process. After the ports become active, you will periodically receive the following syslog messages:

You configured VLAN 99 as the native VLAN on S1. However, the S2 and S3 are using VLAN 1 as the default native VLAN as indicated by the syslog message.

Although you have a native VLAN mismatch, pings between PCs on the same VLAN are now successful. Why?
[alert-success] Pings are successful because trunking has been enabled on S1. Dynamic Trunking Protocol (DTP) has automatically negotiated the other side of the trunk links. In this case, S2 and S3 have now automatically configured the ports attached to S1 as trunking ports. [/alert-success]

Verify trunking is enabled on S2 and S3.

On S2 and S3, issue the show interface trunk command to confirm that DTP has successfully negotiated trunking with S1 on S2 and S3. The output also displays information about the trunk interfaces on S2 and S3.
Which active VLANs are allowed to across the trunk?

Step 2: Correct the native VLAN mismatch on S2 and S3.

a. Configure VLAN 99 as the native VLAN for the appropriate interfaces on S2 and S3.

a. Issue the show interface interface switchport command to verify that the native VLAN is now 99.

b. Use the show vlan command to display information regarding configured VLANs. Why is port G1/1 on S2 no longer assigned to VLAN 1? 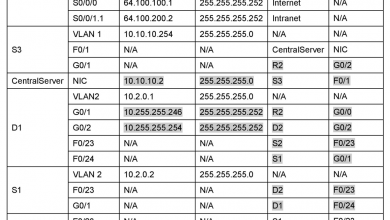 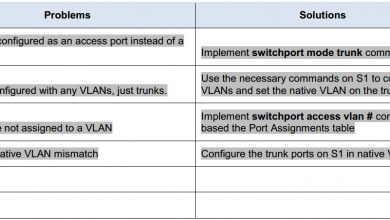