2. Which two keywords can be used in an access control list to replace a wildcard mask or address and wildcard mask pair? (Choose two.)

Explanation: The two keywords that can be used when configuring ACLs are host and any. The host keyword is equivalent to using the 0.0.0.0 wildcard mask and the any keyword could be used instead of the 255.255.255.255 wildcard mask.

3. Which command is used to activate an IPv6 ACL named ENG_ACL on an interface so that the router filters traffic prior to accessing the routing table?

Explanation: For the purpose of applying an access list to a particular interface, the ipv6 traffic-filter IPv6 command is equivalent to the access-group IPv4 command. The direction in which the traffic is examined (in or out) is also required.

5. When configuring SSH on a router to implement secure network management, a network engineer has issued the login local and transport input ssh line vty commands. What three additional configuration actions have to be performed to complete the SSH configuration? (Choose three.)

Explanation: SSH is automatically enabled after the RSA keys are generated. Setting user privilege levels and configuring role-based CLI access are good security practices but are not a requirement of implementing SSH.

7. Which two characteristics are shared by both standard and extended ACLs? (Choose two.)

8. What method is used to apply an IPv6 ACL to a router interface?

Explanation: A network administrator will use the ipv6 traffic-filter command within interface configuration mode to apply an IPv6 ACL.​

Explanation: A wildcard mask uses 0s to indicate that bits must match. 0s in the first three octets represent 24 bits and four more zeros in the last octet, represent a total of 28 bits that must match. The four 1s represented by the decimal value of 15 represents the four bits to ignore.

11. Which feature is unique to IPv6 ACLs when compared to those of IPv4 ACLs?

Explanation: One of the major differences between IPv6 and IPv4 ACLs are two implicit permit statements at the end of any IPv6 ACL. These two permit statements allow neighbor discovery operations to function on the router interface.

12. Refer to the exhibit. The settings to connect to a RADIUS server were issued on router Rtr1. Which conclusion can be drawn if a problem occurs with AAA authentication between Rtr1 and Server1?

13. Which statement correctly describes how an ACL can be used with the access-class command to filter vty access to a router?

Explanation: By design, the access-class command only matches the source IP address. Therefore, if an extended access list is used, the any parameter must be used as the destination IP address or the configuration will not work.

14. A network administrator is configuring a prefix list with the ip prefix-list command. Which entry is valid?

15. A network administrator configures uRPF on a Cisco router interface with the ip verify unicast source reachable-via rx allow-default command to eliminate spoofed IP packets on a network. Which conclusion can be drawn from this configuration?

Explanation: The uRPF configuration is applied on an interface-by-interface basis with the ip verify unicast source reachable-via { rx | any } [ allow-default ] [ allow-self-ping ] [list ] command. For strict mode, the rx option should be used, and for loose mode the any option should be used. The allow-default option is used when the return path is associated with an interface that is chosen based on a default route.

16. Which two commands can be used to verify the content and placement of access control lists? (Choose two.)

Explanation: If troubleshooting or verifying an ACL, an administrator needs to view the access list statements and verify what interface and direction is being used. Two commands that accomplish this task are show access-lists and show running-config .

17. Which prefix-list entry will be used when multiple entries in a prefix list match a given prefix?

18. Which IPv6 First-Hop Security feature can block IPv6 traffic if this traffic is from an unknown origin?

19. Refer to the exhibit. Router R1 is configured as shown. An administrative user attempts to use Telnet from router R2 to R1 using the interface IP address 10.10.10.1. However, Telnet access is denied. Which conclusion can be drawn from this scenario? 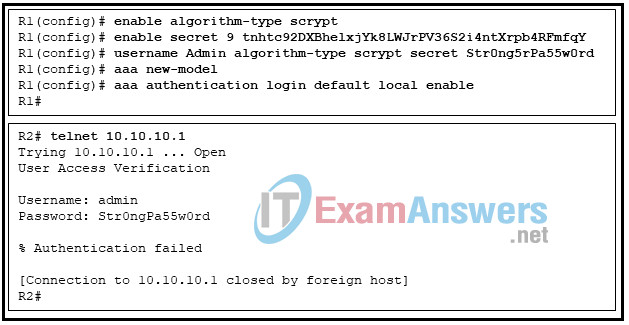 Explanation: The AAA authentication is defined with the list default with two methods. The first method is to use the local database and the second method is to use the enable password. The local keyword indicates that the username and password are not case-sensitive, so the username can be typed as “admin”. The problem is that the password is “Str0ng5rPa55w0rd” and the user typed “Str0ngPa55w0rd”.

20. What happens when a packet does not match any of the defined class maps specified in a policy map?

Explanation: If a packet does not match any of the defined classes, it is subject to the conditions laid out in the default class.

21. Refer to the exhibit. Which piece of information can be obtained from the AAA configuration commands?

22. A junior engineer is learning how to apply a service policy to a Cisco router control plane. Which piece of information should be considered to perform this configuration?

Explanation: DHCPv6 Guard is a feature designed to ensure that rogue DHCPv6 servers are not able to hand out addresses to clients, redirect client traffic, or starve out the DHCPv6 server and cause a DoS attack. DHCPv6 Guard requires a policy to be configured in DHCP Guard configuration mode, and DHCPv6 Guard is enabled on an interface-by-interface basis.

Explanation: The ACL requires an ACE denying Telnet access from all users in the LAN to the file server at 2001:DB8:100:50::15/64. The IPv6 ACL also has an implicit deny, so a permit statement is required to allow all other traffic. With IPv6, the ipv6 traffic filter command is used to bind the ACL to the interface.

Explanation: The order of the statements within the prefix list is wrong. Currently, all networks are permitted before the Branch network is denied. The administrator must modify the prefix list to add a sequence 5 with the deny statement to deny network 172.18.100.0/24 and remove the seq 15 statement.

26. Refer to the exhibit. A network administrator is configuring an ACL to limit the connection to R1 vty lines to only the IT group workstations in the network 192.168.22.0/28. The administrator verifies the successful Telnet connections from a workstation with IP 192.168.22.5 to R1 before the ACL is applied. However, after the ACL is applied to the interface Fa0/0, Telnet connections are denied. What is the cause of the connection failure? 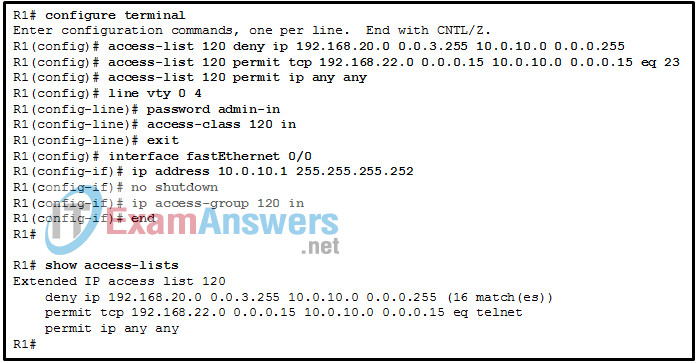 27. Refer to the exhibit. Which SNMP authentication password must be used by the member of the ADMIN group that is configured on router R1?

28. A computer technician is monitoring traffic on a network where users are complaining about slow network performance. The technician is curious as to whether the new network management software is causing the slowdown. Which two port numbers would the technician be looking for in the captured packets for SNMP traffic? (Choose two.)

29. Which two types of probes can be configured to monitor traffic by IP SLA within a network environment? (Choose two.)

Explanation: IP SLA is a tool that allows for the continuous monitoring of various aspects of the network. Different types of probes can be configured to monitor traffic within a network environment:

30. What is the recommended action when troubleshooting scenarios for CoPP, where specific source and destination IP addresses are used in the ACL?

Explanation: When troubleshooting ACLs for CoPP, one recommended action if specific source and destination IP addresses are used is changing the IP addresses in the ACL to any / any . If the match is successful, then there is an issue with the original IP addresses. If not, the IP addresses were likely not the problem.

31. Which action is necessary to provide encrypted transfer of data between a RADIUS server and a AAA-enabled router?

Explanation: The key command configures the preshared key on a RADIUS server that is used for encryption. The keys must be identical on the router and on the RADIUS server. The creation of a VPN tunnel is unnecessary. The configuration of ports does not have any effect on encryption.

32. A teacher is explaining uRPF to network students in a classroom. Which two statements are accurate about uRPF operation on a Cisco router? (Choose two.)

Explanation: Unicast Reverse Path Forwarding (uRPF) helps limit or even eliminate spoofed IP packets on a network. This is accomplished by examining the source IP address of an ingress packet and determining whether the packet is valid. Cisco Express Forwarding must be enabled on the IOS device for uRPF to work. The feature uRPF can operate in three different modes: strict, loose, and VRF. With uRPF, any packets generated by the router and destined to the router are discarded by default.

Explanation: There are several possible configuration issues to account for why SSH connections are failing. Among them are (1) the VTY lines should accept SSH connections by the transport input all or transport input ssh command; and (2) if there is an extended ACL to protect access to the vty lines, the port (either by the word ssh or the numeric number) should be included in the permit ACE. Because Telnet works, the connectivity to the vty line can be established, and thus the option that the standard ACL is blocking the workstation from access to the router does not apply. The option that the ip access-class command is missing does not apply because if the command is missing, no ACL will be applied to filter the access to vty lines. (Although the statement might be true in the router configuration, it is not a reason why SSH is not successful.) Finally the option that the password is misconfigured on the console line does not apply because SSH connects to vty lines, not to the console line.

34. A network technician is configuring SNMPv3 and has set a security level of auth . What is the effect of this setting?

35. Refer to the exhibit. A SNMP manager has IP address 172.16.1.120. The SNMP manager is unable to change configuration variables on the R1 SNMP agent. What could be the problem?

36. Refer to the exhibit. The administrator configured the access to the console and the vty lines of a router. Which conclusion can be drawn from this configuration?​

Explanation: By default, the IOS includes the login command on the vty lines. This prevents Telnet access to the device without authentication. If, by mistake, the no login command is set, which removes the requirement for authentication, unauthorized persons could connect across the network to the line through Telnet. This would be a major security risk.​ 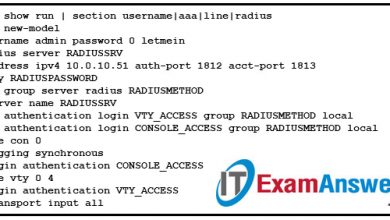 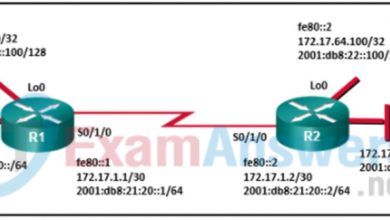 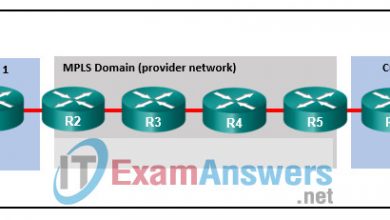 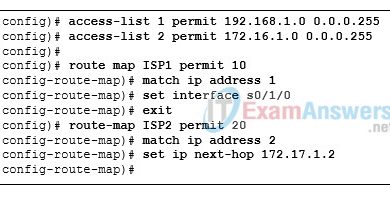