1. What is the purpose of STP?

Explanation: The purpose of the Spanning Tree Protocol (STP) is to break Layer 2 loops in the network so that frames do not loop endlessly.

2. Which RSTP ports are connected to end devices?

Explanation: Switch ports that connect to host devices are RSTP edge ports and will immediately transition to the forwarding state when the port is enabled.

3. If no bridge priority is configured in PVST, which criteria is considered when electing the root bridge?

4. In which two port states does a switch learn MAC addresses and process BPDUs in a PVST network? (Choose two.)

5. An administrator is troubleshooting a switch and wants to verify if it is a root bridge. What command can be used to do this?

Explanation: Of all the commands that are listed, only the correct option, show spanning-tree,displays STP root bridge information.

6. In which two port states does a switch learn MAC addresses and process BPDUs in a PVST network? (Choose two.)

7. Which STP priority configuration would ensure that a switch would always be the root switch?

8. What is the goal of Layer 3 switching?

9. Which two statements are true about routed ports on a multilayer switch? (Choose two.)

Explanation:A switch routed port is a Layer 3 port that requires removal of Layer 2 port functionality with the no switchport interface configuration command. VLANs are associated with switch Layer 2 access and trunk ports.

10. Which two statements are true about the 802.1Q trunking protocol? (Choose two.)

Explanation:802.1Q is a standard trunking protocol where untagged frames are placed on the native VLAN. The native VLAN must be configured the same at both ends of the trunk link.

11. Which technology does CEF switching use on Cisco hardware-based routers to forward packets?

12. What type of specialized memory is used to facilitate high performance switching in Cisco multilayer switches?

13. Which protocol is required for Cisco Express Forwarding to be able to successfully forward packets on a multilayer switch?

Explanation: In order to forward packets, Cisco Express Forwarding (CEF) requires the MAC address of the next hop provided by ARP.

Explanation: Spanning Tree Protocol (STP) is required to ensure correct network operation when designing a network with multiple interconnected Layer 2 switches or using redundant links to eliminate single points of failure between Layer 2 switches. Routing is a Layer 3 function and does not relate to STP. VLANs do reduce the number of broadcast domains but relate to Layer 3 subnets, not STP.

15. If left to default configuration settings, what will determine which switch becomes the spanning-tree root bridge in a Layer 2 domain?

Explanation: By default, all switches will have the same priority value, so the election of the root bridge will be based on the lowest MAC address.

16. During the implementation of Spanning Tree Protocol, all switches are rebooted by the network administrator. What is the first step of the spanning-tree election process?

Explanation: After a Cisco switch boots, it will send out BPDUs containing its individual BID and the root ID for the network. By default, the initial root ID at bootup will be the ID of that individual switch. After a root bridge is elected, port states and paths are chosen.

17. What are the two options that describe the effects of the spanning-tree portfast command? (Choose two.)

Explanation: The portfast feature is enabled on a specific access port with the spanning-tree portfast command. One of the benefits of the STP portfast feature, is that the access ports bypass the earlier 802.1D STP states (learning and listening) and forward traffic immediately.

18. Which LACP technology is used for designating a specific number of member interfaces that must remain active in order for the EtherChannel bundle to be usable?

Explanation: LACP fast advertises an LACP packet every second and after three seconds of not receiving an LACP packet, removes the link from the EtherChannel bundle.
LACP port priority allows an LACP enabled switch to select which member interfaces are active within a port-channel that has more member interfaces than the maximum allowed.
LACP system priority allows an LACP enabled switch to be designated as the master switch for a port-channel.
LACP min-links is used to configure a required minimum number of physical connections that must be active in order for the EtherChannel to stay active.

19. Which statement describes the term root port in the operation of STP?

20. What are two configuration parameters that must match for all switches in the same MST region? (Choose two.)

Explanation: The mst version number and region name must match for all switches in the same MST region. These parameters can be adjusted through MST configuration.

22. Which statement describes the term bridge priority in the operation of STP?

23. Which three components are combined to form a bridge ID?

Explanation: The three components that are combined to form a bridge ID are bridge priority, extended system ID, and MAC address.

24. Refer to the exhibit. The network has converged and Switch_6 has been elected root bridge of the STP tree. However, network traffic analysis indicates that Switch_1 would be a better root bridge. How can the network administrator make this change, assuming that the spanning-tree priorities are at the default settings? 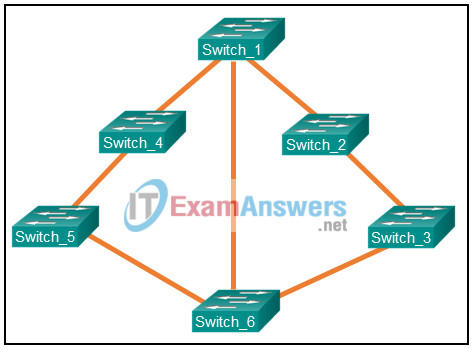 25. Why is it important that the network administrator consider the spanning-tree network diameter when choosing the root bridge?

Explanation: The optional diameter keyword in the spanning-tree vlan vlan-id root {primary | secondary} [diameter diameter] command allows for tuning of the STP convergence. The diameter keyword should reference the maximum number of Layer 2 hops that a switch can be from the root bridge and modify the timers accordingly. The timers do not need to be modified on other switches because they are carried throughout the topology through the root bridge BPDUs.

26. A network administrator enters the spanning-tree portfast bpduguard default command. What is the result of this command being issued on a Cisco switch?

Explanation: The spanning-tree bpduguard default command will enable BPDU guard on all switch ports that have PortFast-enabled. This will put the port in an error-disabled state if a BPDU from another switch is received on a PortFast-enabled interface.

27. Refer to the exhibit. A network administrator is configuring MST tuning on SW1. The objective is to change the path cost value of the interface Gi1/0/1 to represent a higher-speed bandwidth link. Which value could be used in the command spanning-tree mst 0 cost for this task?

28. What are two misconfigurations within an MST region that might introduce port blocking unintentionally? (Choose two.)

29. In what situation would a network administrator most likely implement root guard?

Explanation: Root guard in conjunction with PortFast, and BPDU guard is used to prevent an STP manipulation attack.

Explanation: MST uses a special STP instance called the internal spanning tree (IST), which is always the first instance, instance 0. The IST runs on all switch port interfaces for switches in the MST region, regardless of the VLANs associated with the ports.

31. Assuming that all switches in a network have the default bridge priority for each MST instance, what effect does the command spanning-tree mst 10 root seconday have when entered on a single switch?

32. Refer to the exhibit. The administrator tried to create an EtherChannel between S1 and the other two switches via the commands that are shown, but was unsuccessful. What is the problem? 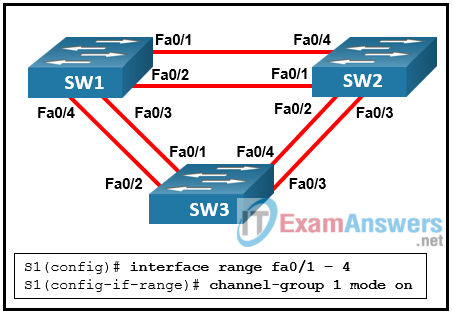 33. Refer to the exhibit. A network administrator issues the show spanning-tree command to verify the MST configuration. Which two conclusions can be drawn based on the output? (Choose two.)

Explanation: SW1 is running MST, which is IEEE 802.1S standard. IEEE 802.1W is the standard for RSTP. SW1 is the root bridge for instance 1. The instance 1 priority is set as 24576. If it is set through the secondary keyword, it would be 28672. If the portfast feature is enabled on a port, the port type would be P2p Edge.

34. How does an MST region send VLAN information through the PVST simulation mechanism to a switch that runs PVST+?

Explanation: The PVST simulation mechanism sends out PVST+ including RSTP BPDUs, one for each VLAN, using the information derived from the internal spanning tree (IST). This requires a mapping of one topology in IST to multiple VLANs toward the PVST link.

35. Which two VTP modes allow for the creation, modification, and deletion of VLANs on the local switch? (Choose two.)

36. Given the following configuration, which two statements are true? (Choose two.)

Explanation: A switch in VTP server mode can create, modify, and delete VLANs as well as transmit that information (if the switch has the highest VTP configuration revision number) to other switches in the same VTP domain.

37. Which Cisco proprietary protocol is used for dynamically forming a trunk connection between two switches?

38. Which technology is used to protect the switched infrastructure from problems caused by receiving BPDUs on ports that should not be receiving them?

Explanation: To form a single path through a Layer 2 network, Layer 2 devices communicate with one another by the use of bridge protocol data units (BPDUs) as part of the Spanning Tree Protocol (STP). An attacker manipulates STP by spoofing the root bridge so that a device that is controlled by the attacker becomes a root bridge. The attacker can then obtain more information about the network or networks. BPDU guard can be used on ports that connect to user devices that are configured with PortFast so that BPDUs will not be accepted through that port.

39. Which statement describes the term blocking in the operation of STP?

40. The network administrator wants to configure a switch to pass VLAN update information to other switches in the domain but not update its own local VLAN database. Which two steps should the administrator perform to achieve this? (Choose two.)

Explanation: Besides the VTP domain name and mode needing to be configured, the switch must connect to other switches in the same VTP domain through a trunk in order to transmit/receive VTP information.

41. Which is a characteristic of EtherChannel?

42. Refer to the exhibit. An EtherChannel was configured between switches S1 and S2, but the interfaces do not form an EtherChannel. What is the problem? 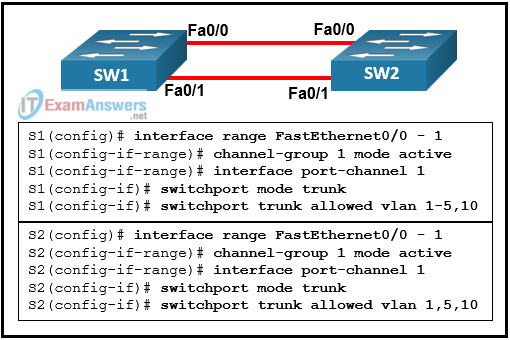 Explanation:The guidelines for configuring an EtherChannel link are as follows:

44. Which statement is true about the port roles of the 802.1w Rapid Spanning Tree Protocol?

Explanation: In order to create a loop-free topology, 802.1w RSTP has the following port roles: root, designated, alternate, edge, and backup. RSTP is able to actively confirm that a port can safely transition to the forwarding state without having to rely on a timer configuration.

46. Which LACP technology can identify and remove a LACP enabled link from an EtherChannel within three seconds when the link is experiencing connectivity issues? 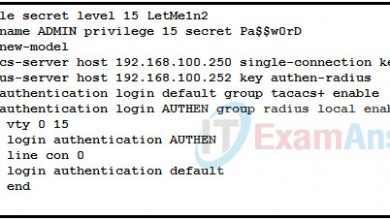 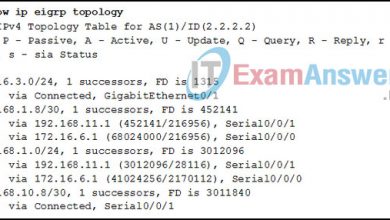 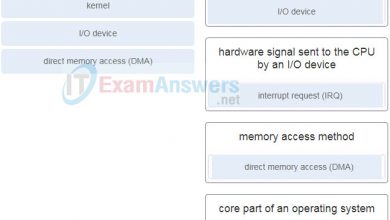 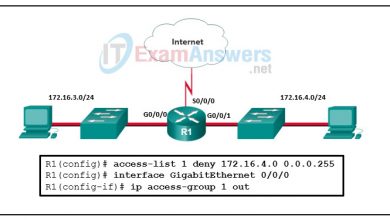