2. When a range of ports is being configured for EtherChannel, which mode will configure LACP so that it initiates the EtherChannel negotiation?

3. What will happen if a network administrator puts a port that is part of an EtherChannel bundle into a different VLAN than the other ports in that bundle?

4. When a range of ports is being configured for EtherChannel, which mode will configure LACP on a port only if the port receives LACP packets from another device?

5. Which three components are combined to form a bridge ID?

Explanation: The three components that are combined to form a bridge ID are bridge priority, extended system ID, and MAC address.

6. Match the STP protocol with the correct description. (Not all options are used.) 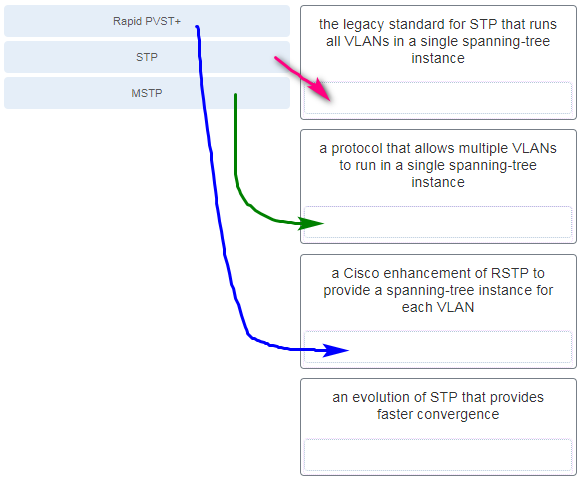 7. In which two port states does a switch learn MAC addresses and process BPDUs in a PVST network? (Choose two.)

8. If no bridge priority is configured in PVST, which criteria is considered when electing the root bridge?

9. Match the spanning-tree feature with the protocol type. (Not all options are used.) 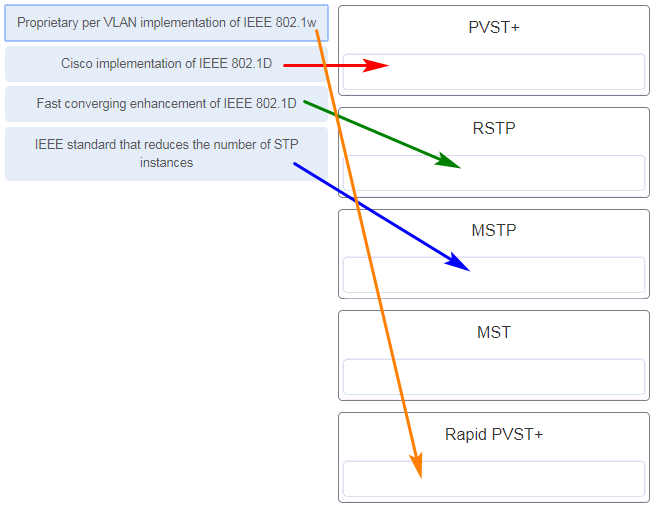 Explanation: The role of each of the three ports will be either designated port or root port. Ports in the disabled state are administratively disabled. Ports in the blocking state are alternate ports.

11. What is the function of STP in a scalable network?

12. What is a characteristic of spanning tree?

13. Which spanning tree standard supports only one root bridge so that traffic from all VLANs flows over the same path?

Explanation: MST is the Cisco implementation of MSTP, an IEEE standard protocol that provides up to 16 instances of RSTP. PVST+ provides a separate 802.1D spanning-tree instance for each VLAN that is configured in the network. 802.1D is the original STP standard defined by the IEEE and allows for only one root bridge for all VLANs. 802.1w, or RSTP, provides faster convergence but still uses only one STP instance for all VLANs.

14. What is the purpose of the Spanning Tree Protocol (STP)?

15. What is the value used to determine which port on a non-root bridge will become a root port in a STP network?

16. Refer to the exhibit. Which switch will be the root bridge after the election process is complete? 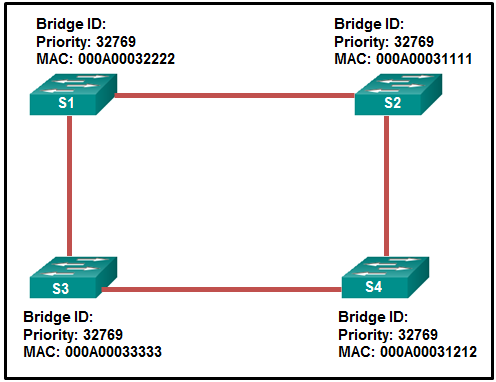 17. What are two drawbacks to turning spanning tree off and having multiple paths through the Layer 2 switch network? (Choose two.)

Explanation: Spanning tree should never be disabled. Without it, the MAC address table becomes unstable, broadcast storms can render network clients and the switches unusable, and multiple copies of unicast frames can be delivered to the end devices.

18. A small company network has six interconnected Layer 2 switches. Currently all switches are using the default bridge priority value. Which value can be used to configure the bridge priority of one of the switches to ensure that it becomes the root bridge in this design?

Explanation: The default bridge priority value for all Cisco switches is 32768. The range is 0 to 61440 in increments of 4096. Thus, the values 1 and 34816 are invalid. Configuring one switch with the lower value of 28672 (and leaving the bridge priority value of all other switches unchanged) will make the switch become the root bridge.

19. Refer to the exhibit. The administrator tried to create an EtherChannel between S1 and the other two switches via the commands that are shown, but was unsuccessful. What is the problem? 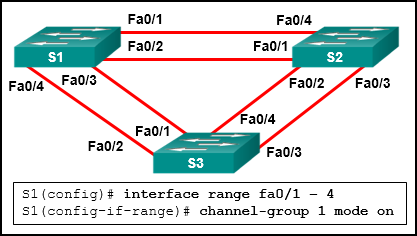 20. Which statement is true regarding the use of PAgP to create EtherChannels?

Explanation: PAgP is used to automatically aggregate multiple ports into an EtherChannel bundle, but it only works between Cisco devices. LACP can be used for the same purpose between Cisco and non-Cisco devices. PAgP must have the same duplex mode at both ends and can use two ports or more. The number of ports depends on the switch platform or module. An EtherChannel aggregated link is seen as one port by the spanning-tree algorithm.

21. What are two requirements to be able to configure an EtherChannel between two switches? (Choose two.)

Explanation: All interfaces in the EtherChannel bundle must be assigned to the same VLAN or be configured as a trunk. If the allowed range of VLANs is not the same, the interfaces do not form an EtherChannel even when set to auto or desirable mode.

22. Refer to the exhibit. On the basis of the output that is shown, what can be determined about the EtherChannel bundle?

Explanation: Two protocols can be used to send negotiation frames that are used to try to establish an EtherChannel link: PAgP and LACP. PAgP is Cisco proprietary, and LACP adheres to the industry standard.

23. Which two parameters must match on the ports of two switches to create a PAgP EtherChannel between the switches? (Choose two.)

Explanation: For an EtherChannel to be created, the ports that are concerned on the two switches must match in terms of the speed, duplex, and VLAN information. The PAgP mode must be compatible but not necessarily equal. The port ID and the MAC addresses do not have to match.

24. Refer to the exhibit. A network administrator is configuring an EtherChannel link between two switches, SW1 and SW2. Which statement describes the effect after the commands are issued on SW1 and SW2?

25. Refer to the exhibit. A network administrator is configuring an EtherChannel link between two switches, SW1 and SW2. However, the EtherChannel link fails to establish. What change in configuration would correct the problem?

Explanation: EtherChannel creates an aggregation that is seen as one logical link. It provides redundancy because the overall link is one logical connection. The loss of one physical link within the channel does not create a change in the topology; the EtherChannel remains functional.

27. A network administrator is configuring an EtherChannel link between switches SW1 and SW2 by using the command SW1(config-if-range)# channel-group 1 mode auto . Which command must be used on SW2 to enable this EtherChannel?

Explanation: The possible combinations to establish an EtherChannel between SW1 and SW2 using LACP or PAgP are as follows:
PAgP
on on
auto desirable
desirable desirable

28. Which technology is an open protocol standard that allows switches to automatically bundle physical ports into a single logical link?

Explanation: LACP, or Link Aggregation Control Protocol, is defined by IEEE 802.3ad and is an open standard protocol. LACP allows switches to automatically bundle switch ports into a single logical link to increase bandwidth. PAgP, or Port Aggregation Protocol, performs a similar function, but it is a Cisco proprietary protocol. DTP is Dynamic Trunking Protocol and is used to automatically and dynamically build trunks between switches. Multilink PPP is used to load-balance PPP traffic across multiple serial interfaces.

29. What is a requirement to configure a trunking EtherChannel between two switches?

30. What are two advantages of using LACP? (Choose two.)

31. A switch is configured to run STP. What term describes a non-root port that is permitted to forward traffic on the network?

32. What are two advantages of EtherChannel? (Choose two.)

33. Refer to the exhibit. What are the possible port roles for ports A, B, C, and D in this RSTP-enabled network?

Explanation: Because S1 is the root bridge, B is a designated port, and C and D root ports. RSTP supports a new port type, alternate port in discarding state, that can be port A in this scenario.

34. Refer to the exhibit. Which switching technology would allow each access layer switch link to be aggregated to provide more bandwidth between each Layer 2 switch and the Layer 3 switch?

Explanation: PortFast is used to reduce the amount of time that a port spends going through the spanning-tree algorithm, so that devices can start sending data sooner. Trunking can be implemented in conjunction with EtherChannel, but trunking alone does not aggregate switch links. HSRP is used to load-balance traffic across two different connections to Layer 3 devices for default gateway redundancy. HSRP does not aggregate links at either Layer 2 or Layer 3 as EtherChannel does.

35. Refer to the exhibit. An administrator wants to form an EtherChannel between the two switches by using the Port Aggregation Protocol. If switch S1 is configured to be in auto mode, which mode should be configured on S2 to form the EtherChannel?

Explanation: An EtherChannel will be formed via PAgP when both switches are in on mode or when one of them is in auto or desirable mode and the other is in desirable mode.

36. Open the PT Activity. Perform the tasks in the activity instructions and then answer the question.
Which set of configuration commands issued on SW1 will successfully complete the EtherChannel link between SW1 and SW2?

37. A set of switches is being connected in a LAN topology. Which STP bridge priority value will make it least likely for the switch to be selected as the root?

Explanation: The two PVST+ port states during which MAC addresses are learned and populate the MAC address table are the learning and the forwarding states.

39. Which port role is assigned to the switch port that has the lowest cost to reach the root bridge?

40. A switch is configured to run STP. What term describes the switch port closest, in terms of overall cost, to the root bridge

42. A switch is configured to run STP. What term describes a field used to specify a VLAN ID?

43. A switch is configured to run STP. What term describes the reference point for all path calculations?

44. A switch is configured to run STP. What term describes a field that has a default value of 32,768 and is the initial deciding factor when electing a root bridge?

45. Which statement describes an EtherChannel implementation?

46. Refer to the exhibit. A network administrator issued the show etherchannel summary command on the switch S1. What conclusion can be drawn?

47. Which statement describes a characteristic of EtherChannel?

49. Which mode configuration setting would allow formation of an EtherChannel link between switches SW1 and SW2 without sending negotiation traffic?

50. Refer to the exhibit. An EtherChannel was configured between switches S1 and S2, but the interfaces do not form an EtherChannel. What is the problem?

51. When EtherChannel is configured, which mode will force an interface into a port channel without exchanging aggregation protocol packets?

52. What are two load-balancing methods in the EtherChannel technology? (Choose two.)

53. Which protocol provides up to 16 instances of RSTP, combines many VLANs with the same physical and logical topology into a common RSTP instance, and provides support for PortFast, BPDU guard, BPDU filter, root guard, and loop guard?

54. What is the outcome of a Layer 2 broadcast storm?

56. A network administrator has configured an EtherChannel between two switches that are connected via four trunk links. If the physical interface for one of the trunk links changes to a down state, what happens to the EtherChannel?